Designed for gaming
Combining a stunning OLED screen, the latest technology to deliver the best performance and graphics, full PlayStation Network connectivity, dual analog sticks and the best launch line up of games, PlayStation Vita is a dream come true for gamers.

New ways to play
The features of PlayStation Vita combine with a diverse, truly innovative range of software to introduce brand new ways to play games. Whether it's using the unique rear touch pad, the dual analog sticks, cameras, GPS - or a combination of them all - players can look forward to an unprecedented level of intuitive interaction with the games they play.

The very best digital back catalogue
As well as the huge variety of games and apps designed for PlayStation Vita , all digital PSP (PlayStation Portable) releases are also compatible, allowing access to a huge catalogue of games at pocket money prices.

Multimedia features
Listen to tracks from your music library whilst playing games; enjoy blockbuster movies downloaded from PlayStation Store on the OLED screen; or take snaps and browse your photo collection in the pre-installed image viewer.

Spread the cost of your PS Vita Bundle at 24studio.co.uk

Only £299.99
No comments:
Email ThisBlogThis!Share to TwitterShare to FacebookShare to Pinterest

Skylanders Spyro's Adventure - Priced From Only £7.99


A Unique Concept: The Revolutionary Fusion of Toys & Video Games!

Join the battle to save Skylands and embark on a fantastical journey into the mysterious, mythical world, battle menacing outlandish creatures, collect treasures, and solve puzzles while on a quest to save their world from evil. 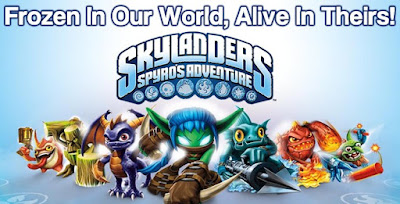 Bring your characters to life in a boldly innovative adventure game where children can collect real-world toys and teleport them directly into the game using a mystical Portal of Power.

Play with or against your friends on quests throughout Skylands and in the player vs. player battle arenas. Challenge yourself with lots of different fun mini-games.

For Generations, the Skylanders have used their magical powers and weapons to protect Skylands. But now, an evil tyrant has frozen them and banished them to Earth. Only you can put them on the Portal of Power and bring them to life to save Skylands forever.

The Skylanders are so powerful that they remember their in-game experiences and upgrades as they explore the mysterious world of Skylands, battle menacing creatures and collect treasures.

It doesn't matter what gaming system your friends have at their house, the Skylanders work on and across all major video game systems*.

Order yours today from 24studio.co.uk


Okay we’ve had a bit of bad luck this past week with the weather, but the good weather the week before really got me thinking about camping (and technically spring is here) so my thinking is – be prepared for the next bout of good weather. Next time we have a sunny weekend I am going to go camping, and in a pretty tent like this Gelert Quick Pitch Tent.

What I love about the Gelert Quick Pitch Tent is that you can basically pitch this tent in seconds! No fuss no hassle, just do what it shows in the inset – throw it, then pitch it easily using the pre-attached guylines! Happy Days!

Camping is a great and cheap way to enjoy the best of what Britain has to offer, whether it's camping in the Lake District, at Kendal Calling or even in your back garden the GelertQuick Pitch Tent is a great all round tent that can be pitched in seconds!