The 45-year-old actor took a break from shooting upcoming film 'Robin Hood' in Sunningdale, Berkshire, to visit a Cancer Research store where he spoke to staff before handing over the generous sum.

A volunteer said: "We couldn't believe it when Russell Crowe came in and gave us the money. We knew he was in the area and we were all hoping to see him, but we never thought we would get quite so close to him. "We were all a bit star-struck, but it was lovely to meet him and he stopped and took the time to speak to us."

Russell has been very generous with his money recently. Last month, the star gave staff at a Welsh pub a £600 tip to thank them for preparing dinner for him and nine friends. 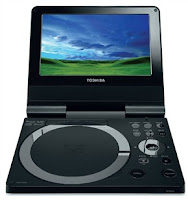 One worker said: "Now if anyone badmouths him I tell them to shut up. He could have paid and just left but they stayed instead and entertained us."Then he paid us that tip - it's the last thing you expect. He seemed quite friendly and chatty like a really nice guy."

Watch all of your favourite Movies on this Toshiba SDP73 Portable DVD Player only £149.99
Email ThisBlogThis!Share to TwitterShare to FacebookShare to Pinterest