'Ramsay is a one-trick pony'

Antony Worrall Thompson has said that Gordon Ramsay is a "one-trick pony" as a chef.

The former Ready Steady Cook star told Waitrose Food Illustrated that Ramsay is limited in the type of food he prepares.

Thompson said: "Gordon knows Michelin food but I have a feeling he hasn't got any depth.

"I don't think he reads cookbooks like they were novels like I tend to do. He's a one-trick pony."

He added that Ramsay had apologised to him at the Birmingham Good Food Show earlier this year after calling him a "squashed Bee Gee" who "can't cook to save his life" in the past. 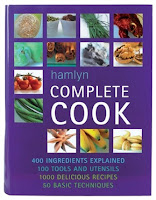 Want to learn how to cook? Check out the fantastic range of cookbooks at 24studio.co.uk.

This Hamlyn Complete Cook Book is an invaluable reference book for cooks of all abilities and ages. Was £30 now only £9.99
Email ThisBlogThis!Share to TwitterShare to FacebookShare to Pinterest
Newer Post Older Post Home